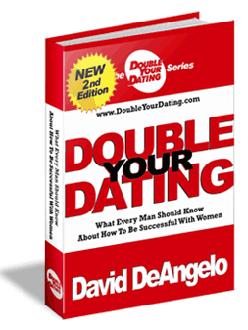 The PUA book that started it all…

Hey out there! Today I wanted to look backwards at where this whole PUA book phenomenon started from and talk about the original that got every thing started, David DeAngelo’s Double Your Dating ebook…

Special Offer: Download Double Your Dating & 4 Bonuses For Only $14.95!

This is the first book that I ever read about being successful with women, and I have always remembered it fondly so I decided to take a peek at it again after all of these years and give it a quick read through so I could review it for you with all the big ideas from the book still fresh in my brain!

Note: If you are at the point where you are looking for a passionate, fulfilling LOVE RELATIONSHIP with an amazing woman, check out David’s new program “Love: The Final Chapter” you can read my new review here.

Does David D’s Double Your Dating book deserve it’s rep as a classic?

Some younger guys may doubt David DeAngelo based on the fact that they can’t picture him kicking game to a banging hot 22 year old chick in a night club. The fact is that he is an older guy, definitely over 40, he’s now married and has also become a well known personal development and business guru. So clearly he’s not living the life of a rockstar pick up artist or anything like that.

However I certainly would not dismiss him or the stuff he teaches based on these facts.

Personally, whether he can pick up on a coed at this point is irrelevant to me.

I know dozens of guys who get laid like crazy by super hot young women, but they couldn’t teach anybody else how to do it… So I would rather learn from somebody who can teach me something, rather than somebody who is personally good at something… If that makes any sense.

And in the end we will never know for sure which if any of these PUA guys REALLY are masters with women in there own personal lives unless you actually hung out with them in person for a few days and got to see what they were like in “real life”.

So I guess the bottom line here is that I don’t know whether David DeAngelo can really pick up on a hot chick, and it really doesn’t matter. What matters is if he can teach you to do it!

What’s the book like? Does it teach you good stuff?

The book itself is fairly short and very well written. David is a smart, talented guy, and the way he writes makes you like him. It is interesting, entertaining, humorous and engaging… All around one of the best written dating guides.

The stuff David teaches in the book is in my opinion 85% good information, 5% great information, and 10% stuff I don’t personally agree with.

The good information includes a lot of dating concepts that you may have read elsewhere because David’s stuff has been ripped off so many times by all of the other dating gurus. However, if you haven’t read many PUA books then much of it will be new to you and it really is some ground breaking stuff, or I should say was some ground breaking stuff when it was first released.

The great stuff is really great and I think that this is why this book was such a hit and why it is so popular to this day. David came out with ideas like how to be “cocky and funny” and shares some really powerful concepts and paradigm shifts that can really change the way that you look at attraction and dating if his ideas resonate with you.

The stuff I didn’t like… Well, there is a bit. I think that since it is a short book David couldn’t really create an action plan that is customized to every guys situation, so there is some stuff in there that I just wouldn’t do because it’s not me…

Do I recommend reading Double Your Dating?

The thing with Double Your Dating is that not only is it a well written book with a lot of sound advice on attarcting women, but the things only costs $14.95! Yup, it’s crazy cheap, plus you get a stack of bonuses.

When you take the  price into consideration, it’s a no-brainer.

I can assure you that Double Your Dating has way more valuable information than 95% of the 47-97 dollar PUA courses on the market.